Other than conservatives, is there a group of people anywhere dumber than American liberals? How childish is this thinking?: Change the law and all the guns will vanish and then shooting will decrease. Here’s a more likely result: the second America Civil War, mass assassinations and murders, state secession, hundreds of thousands or even millions killed in, wait for it … gun violence, as Americans by the millions choose to protect their rights to firearms by using them, and the state clamps...

Saturday the 24th I'm giving a talk about Afghanistan to the Libertarian Party of New Jersey state convention. It's at the University Inn on the campus of Rutgers University in New Brunswick. Find out more here.

The U.S. War in Afghanistan is Unwinnable

I gave a talk about the Afghan war at Middle East Books and More in Washington, D.C. on March 4. https://www.youtube.com/watch?v=jYkM3Vzl6v0&lc=

They Lied Us Into War, All of Them

And I don't just mean Iraq War II. A friend wanted a list, so I whipped one up real quick. Gulf of Tonkin 1967: McNamara knew it was a mistake before LBJ used it as an excuse to escalate. Daniel Ellsberg's firsthand account from inside the Pentagon: http://www.pbs.org/pov/mostdangerousman/excerpt-ellsberg-memoir/2/ (Gareth Porter says Mac kept the truth from LBJ: https://consortiumnews.com/2014/08/05/how-lbj-was-deceived-on-gulf-of-tonkin/ ) Cold War's End 1988-1991: CIA so busy lying about...

Wed Feb 7th at 7:30 I’m doing a presentation on the terror wars for Thaddeus Russel’s Renegade University. (My previous talk on Afghanistan for Renegade University is here.) Feb 24th at 7:00 PM I’m giving a talk at Austin, Anarchy and Action at Treasure City Thrift Store, 2142 E 7th St, in Austin. March 2-4 D.C.: March 2 I’ll be tabling and selling books at the Israel Lobby Conference at the Washington Press Club. March 3 I’m flying up to Philadelphia to give a talk at the Pennsylvania...

Bob Parry was a former good friend of the show. I had him on at least 18 times. (I can't help but think there were more that got lost somehow.) He was actually one of the first guests when I started the daily show, Antiwar Radio, for KAOS 95.9 FM in Austin in 2007. I cussed him out and didn't speak to him any more after he wrote some stupid bullshit about libertarians a few years ago, but I never stopped running him or his best guys at Antiwar.com since Bob's journalism could not be beat. He...

Thank You From a Military Officer

Scott, I just want to say thank you from the bottom of my heart as you have changed my life for the better.  Today I resigned my commission in the United States Army as I can no longer be part of a death machine that does no good for any part of a peaceful, productive society.  Your website and podcast have turned me from a vengeful, war loving person to a man of peaceful voluntarism.  I cannot thank you enough as you have made me a better person, thus making me a better husband, father, and... 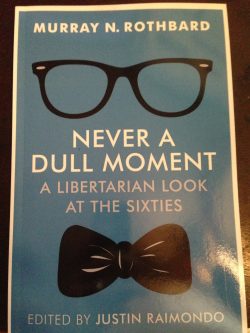 Check it out yall!: Exclusive to listeners of this show! Anyone who donates $50 or more to support the show gets a copy of the brand new Never a Dull Moment: A Libertarian Look at the Sixties a collection of lost Murray Rothbard essays from 1967 and 1968 on Vietnam, the civil rights movement, LBJ, Nixon and much more. So help support the show and be the first to get your eyes on this badass brand new Rothbard book! scotthorton.org/donate Never a Dull Moment

My wife Larisa Alexandrovna Horton wrote up a great piece analyzing the 28 Pages Antiwar.com. Here's the my site version.

I'm doing an AMA at Reddit if yall wanna check it out.

No more live weekday show. KPFK on Sundays, other interviews at scotthorton.org/interviews