Enough Already: Time to End the War on Terrorism

I wrote another book, Enough Already: Time to End the War on Terrorism. 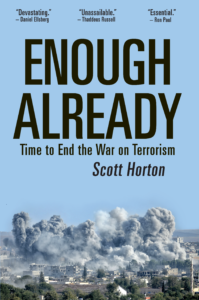 Enough Already, For Crying Out Loud

“If you only read one book this year on America’s unending ‘War on Terror,’ it should be this persuasive and devastatingly damning account of how the United States created the original al Qaeda terrorism threat by its own actions and then increased that threat by orders of magnitude by its wanton killings in one country after another in the name of ‘counter-terrorism.’ Once I started reading it, I couldn’t stop!” — Daniel Ellsberg, Pentagon Papers whistleblower and author of The Doomsday Machine: Confessions of a Nuclear War Planner

“Nothing has fueled the abuse of government power in the last 20 years like the ‘War on Terrorism.’ Scott Horton’s essential new book, Enough Already, is the key to understanding why it’s not too late to end the wars and save our country. Three administrations in a row have promised us a more restrained foreign policy. It is time we insisted on it.” — Ron Paul, M.D., former congressman and author of Swords into Plowshares: A Life in Wartime and a Future of Peace and Prosperity

“With outstanding scholarship, research and analysis, Scott Horton’s new book, Enough Already, lays bare the logical absurdity and self-defeating nature of America’s permanent-war establishment. It might have taken its title from a line in the book’s introduction: America’s war policy since at least the Carter Administration has been ‘a policy in search of a reason.’ As Horton painstakingly lays bare, in virtually none of the military conflicts the United States has chosen to fight in since the 1970s was our security ever genuinely threatened. His ultimate solution is the only one that has any chance of preserving American security and giving us a chance to be ready in case we do face a genuine threat in the future: end the pointless and self-defeating forever wars. All of them.” — Lt. Col. Daniel L. Davis, USA (Ret.) four-time combat deployer, two-time winner of the Bronze Star and author of Eleventh Hour in 2020 America: How American Foreign Policy Got Jacked Up and What the Next Administration Can Do About It

“This is it! Finally, we have a comprehensive, rigorously researched, beautifully written and unassailable argument to stop the ‘endless wars’ that virtually no Americans outside the foreign policy establishment want to continue. There is no better time for this book to appear and no better person to write it than Scott Horton, who has been the people’s foreign policy expert for decades. If you want to save lives, buy it, read it and share it.” — Thaddeus Russell, professor of history and philosophy at Willamette University and author of A Renegade History of the United States

“I finished reading Enough Already the same week I had to attend the funeral of a sailor from one of my Iraq deployments. He killed himself leaving behind a wife and three boys. Nothing in this book is simply historical or abstract to tens of millions of families. Scott Horton has written an incredible accounting of the wars of the last twenty years. This book should be used to hold accountable those who purposefully committed these crimes and to remember the generations of Iraqis, Afghans, Somalis, Yemenis, Pakistanis, Palestinians, Libyans, Iranians, Syrians, sub-Saharan Africans and Americans whose lives have been forever damaged and destroyed.” — Capt. Matthew Hoh, USMC (ret.), former senior State Department official, Zabul Province, Afghanistan, senior fellow at the Center for International Policy

“Scott Horton is one of the best informed and hardest hitting critics of the War on Terror. His new book is a gold mine for anyone seeking to learn about the frauds and failures of U.S. foreign policy.” — Jim Bovard, columnist at USA Today and author of Public Policy Hooligan

“Scott Horton’s book courageously investigates the deception that is the ‘War on Terror.’ It provides an impressive and wide-ranging examination of the misguided and costly U.S. foreign policy decisions which led to morally indefensible, strategically useless and militarily catastrophic interventions and wars in Somalia, Afghanistan, Iraq and other parts of the world. Enough Already must be read by every American who cares about the future of his country because the cost of these imprudent wars has proven detrimental to the nation’s moral compass, global reputation, economic well-being and, indeed, national security. Enough Already is an eloquently written book. Using accessible language, exhaustive research and indisputable arguments, Horton’s latest volume is a damning and impassioned case against war.” — Ramzy Baroud, editor of Palestine Chronicle and author of These Chains Will Be Broken: Palestinian Stories of Struggle and Defiance in Israeli Prisons

“Scott Horton has put together a devastating, deeply-researched account of how the U.S. war system betrayed the American people’s trust in carrying out the so-called ‘War on Terror.’ He shows convincingly that it actually served other objectives and represents an unforgivable treachery that has inflicted incalculable harm on the United States. Readers across the entire deeply divided U.S. political spectrum will find truth in it that they can trust.” — Gareth Porter, Martha Gellhorn Award-winning journalist and author of Manufactured Crisis: The Untold Story of the Iran Nuclear Scare

“Scott Horton is a walking encyclopedia of U.S foreign policy, and he has managed to chronicle the entire history of the government’s meddling in the Middle East in this well-written and important volume. Enough Already explains why still today the U.S. government continues to bomb countries at its caprice, long after the perpetrators of the September 11, 2001, attacks have disappeared.” — Laurie Calhoun, author of We Kill Because We Can: From Soldiering to Assassination in the Drone Age

“Fool’s Errand: Time to End the War in Afghanistan was by far the best single account of the Afghan mire. Yet Afghanistan is only one of the conflicts unleashed by the U.S. and Western interventions in the ‘War on Terror.’ Scott Horton has now given us Enough Already: Time to End the War on Terrorism, a masterly history of these chaotic, tragic and above all futile conflicts, ranging with his usual excoriating accuracy from Mali to Pakistan, from Iraq to Yemen by way of Libya and Syria. Millions are dead, disabled or languish desperately far from their homes as the direct result of our blunders, bewilderment and outright malicious stupidity. Thousands of our own soldiers have died or are disabled. Hundreds more of our citizens have died in the U.S. and Europe in what Horton calls the ‘backdraft’ of our disastrous actions. Ignore the self-serving memoirs or grandiose academic tomes; if you read only one book on the so-called ‘War on Terror,’ this must be that book.” — Frank Ledwidge, former Royal Navy Reserve intelligence officer, “Justice Advisor” to the UK Mission in Afghanistan’s Helmand Province and author of Investment in Blood

“There is no better title for Scott Horton’s ambitious new book than Enough Already because honestly, those are the two words that floated through my head the entire time I was reading it. U.S. foreign policy for the last 20 years has been an endless parade of regime changes, useless attempts to ‘fix’ our blunders, extra-legal killing and detention, and military interventions that have made troubled states failed states. It never ends. Whether it be our destruction of Iraq, the illegal drone wars, JSOC manhunting or Hillary Clinton’s last stand in Libya, Scott has expertly harnessed mountains of detail here in a compelling narrative that underscores what a rotten mess the War on Terrorism has become. More importantly it shows that no matter how righteous the mission to go after the 9/11 perpetrators seemed at the time, the American government has managed to twist those goals into something perverse and ultimately more dangerous to the world than the 19 hijackers who changed everything that fateful day. The book is grim but persuasive, and a must read for anyone who is interested in learning how we got to this place two decades later.” — Kelley Beaucar Vlahos, senior adviser at the Quincy Institute for Responsible Statecraft and contributing editor at The American Conservative

Get the ebook that debunks the 11 lies that started 11 wars.

We will use your email to keep you updated on the latest episodes of The Scott Horton Show.