Order my new book, Enough Already: Time to End the War on Terrorism, from Amazon today! 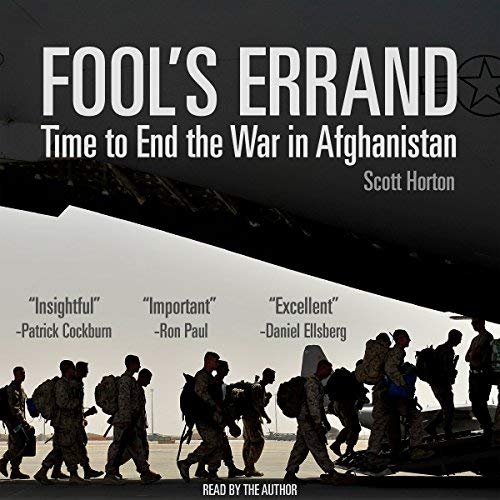 Pete Quinones interviews me about the common narratives about Iran in Iraq and so forth; specifically addressing a hawk's interview on the Joe Rogan show and a recent hawkish piece in the Wall Street Journal.

Scott talks about Syria and Hillary's accusations against Tulsi Gabbard. 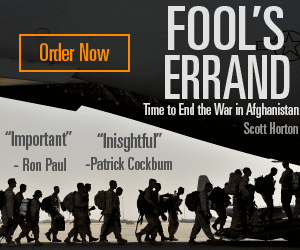 I Just Joined the Libertarian Party

It's all about our great campaign to run Jacob Hornberger for President of the United States next year. "Hey Scott Horton, what can we do?" Yall are always asking. Well here's something we can do. The libertarian movement is joining the Libertarian Party to try to... 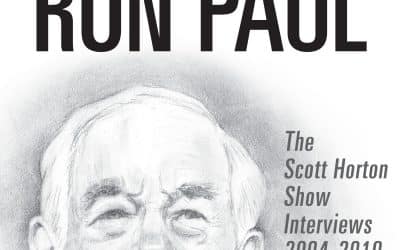 The Libertarian Institute is proud to announce the publication of the brand-new book, The Great Ron Paul: The Scott Horton Show Interviews 2004–2019! It's the heroic Dr. Paul at his very best on war, peace, economics and individual liberty. We know you're going to...

Scott talks to Grant Smith about the upcoming Israel Lobby Con, the annual conference hosting a range of expert speakers who offer opposing views to the mainstream zionist position that dominates American polite society. This year’s conference consists of two sessions, the first on Saturday 4/17 and the second on Saturday 4/24, and will be hosted on Zoom. Sign up for the conference at www.IsraelApartheidCon.org, watch live on YouTube or listen to the podcast afterward.

Grant F. Smith is the author of a number of books including Big Israel: How Israel’s Lobby Moves America, Divert!, and most recently The Israel Lobby Enters State Government: Rise of the Virginia Israel Advisory Board. He is director of the Institute for Research: Middle Eastern Policy in Washington, D.C.

4/13/21 Gareth Porter on Staying in Afghanistan, the Iran Deal and Getting Shut Out of Vietnam

Interview #5,500! Scott talks to Gareth Porter about a range of U.S. foreign policy issues, beginning with the Biden administration’s announcement that it will withdraw all troops from Afghanistan by September 11. To some extent, this is good news, but it obscures what the headline should be—that Biden has decided to break the Trump administration-brokered peace deal to leave by May 1 of this year. Since the Taliban have promised to start fighting again if that deadline is not met, staying another six months could seriously complicate things. Porter also brings us up to speed on America’s relations with Iran, Vietnam and China.

Gareth Porter is an investigative historian and journalist on the national security state. He is the author of Manufactured Crisis: The Untold Story of the Iran Nuclear Scare and, with John Kiriakou, The CIA Insider’s Guide to the Iran Crisis. Follow him on Twitter @GarethPorter and listen to Gareth’s previous appearances on the Scott Horton Show.

Scott interviews Ted Carpenter about America’s dangerous Ukraine policy. Carpenter explains how ever since the Obama administration helped right-wing extremists in Western Ukraine overthrow the elected Russian-aligned government in 2014, the U.S. has been behaving as though it had the right to dictate policy all over Eastern Europe. Thus when Russia moves troops around at its bases on the Western border, the story becomes about Russia threatening our allies in Ukraine, and how the U.S. must be ready to intervene. This is not only a ridiculous policy, Carpenter says, but also a dangerous one. At some point Russia will draw a line in the sand, and if America crosses it, the result could be nuclear war.

Ted Galen Carpenter is a senior fellow for defense and foreign policy studies at the Cato Institute. Carpenter has written 10 books including America’s Coming War with China: A Collision Course over Taiwan and most recently NATO: Dangerous Dinosaur. He is a contributing editor at The American Conservative Magazine and the National Interest.

Jacob Sullum discusses the Biden administration’s possible moves on gun control. Thanks to recent mass shootings, says Sullum, gun control is back in the public eye, resulting in some proposed new laws like background checks, increased “red flag” rules, an “assault weapons” ban and the reclassification of certain firearm accessories. Most of these laws, Sullum says, would do very little to reduce gun violence: most mass shooters, for instance, use common handguns—many also obtained them legally and would pass a background check. Leaving mass shootings aside, which constitute a tiny fraction of gun violence in America, almost all of these laws would inhibit responsible hobbyists while doing very little to stop potentially violent criminals from committing their crimes.

Jacob Sullum is a senior editor at Reason Magazine. He is the author of Saying Yes: In Defense of Drug Use and For Your Own Good: The Anti-Smoking Crusade and the Tyranny of Public Health. Follow him on Twitter @jacobsullum.

Danny Sjursen talks about the absurdity of the recent announcement that America is sending special forces troops to Mozambique, a country that he says has basically no strategic relevance to the United States whatsoever. Those who argue that this is only a dozen operatives who will stay less than two months, he says, don’t understand the way the U.S. military works. These operations always entail a vast number of support personnel and infrastructure, and they always find a way of exceeding their schedules. This is just the latest move in “The Great Game” that America plays for global dominance.

Danny Sjursen is a retired U.S. army major and former history instructor at West Point. He is the author of Ghost Riders of Baghdad: Soldiers, Civilians, and the Myth of the Surge and Patriotic Dissent: America in the Age of Endless War. Follow him on Twitter @SkepticalVet.

Scott interviews Hassan El-Tayyab from the Friends Committee on National Legislation about the effort to end the humanitarian crisis in Yemen. Although the Biden administration announced an end to support for “offensive operations” in Yemen, thanks to the Saudi blockade of the Hodedah port, the country is still experiencing the worst humanitarian crisis in the world. The UN has estimated that 400,000 children could starve to death in 2021—it’s entirely in the power of the U.S. government to stop it.

Scott talks to Jay Schweikert about the promising developments in New Mexico, where a new state-wide law has been enacted that repeals qualified immunity as a legal defense for any public official. This is a similar move, says Schweikert, to legislation adopted recently in Colorado and New York City, but whereas in those places the new measures apply only to police officers, the New Mexico law covers all government employees. Scott and Schweikert consider this a great first step in eliminating the unjust privileges that protect public figures from being held accountable for their actions.

Scott interviews national security attorney Jesselyn Radack about her work in the protection of whistleblowers. Daniel Hale, the man who leaked the so-called “drone papers” to the Intercept in 2014, has just pleaded guilty to violations of the Espionage Act in what Radack calls yet another travesty of justice. Because the Espionage Act, of course, has nothing to do with espionage. It’s never used to go after spies—or any real threat to the well-being of the American people—but only to prosecute people who bravely risk their livelihoods and freedom to expose secrets that Americans have a right to know.

Jesselyn Radack is a national security and human rights lawyer who heads the Whistleblower and Source Protection Program at ExposeFacts. She is the author of TRAITOR: The Whistleblower and the “American Taliban”. Follow her on Twitter @JesselynRadack.